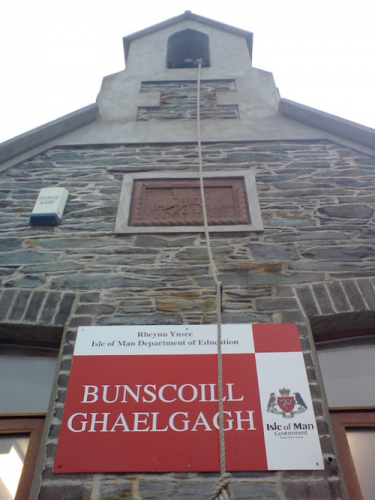 Bunscoill Ghaelgagh is a Manx-language primary school in St John's, Isle of Man. It is the only school in the world where children are taught their lessons solely in Manx Gaelic in an immersion setting, which allows children to learn the language fluently.

The history of the Bunscoill Ghaelgagh really starts with the Manx-language pre-school playgroup, Mooinjer Veggey. This organisation developed out of an interest in the possibilities of reviving the fortunes of Manx Gaelic from the grass roots and took its initial inspiration and guidance from those working within Scottish Gaelic-medium playgroups during the late 1980s and early 1990s.
The successful Mooinjer Veggey Manx -medium playgroups proved successful and gradually led to a demand for continued Manx -medium education at primary school level. In response to parental demand the first Manx-medium class was established in September 2001 by the Isle of Man Department of Education in partnership with Mooinjer Veggey and Sheshaght ny Parentyn, the parent’s organistion. The Manx-medium class operated within a mainstream primary school, Ballacottier School in Douglas. Nine children attended the first Manx-medium class and were taught by a teacher assisted by a nursery nurse. Mooinjer Veggey playgroups continued to provide the great majority of pupils for the Manx-medium class over the next few years.
In January 2003, following the opening of a new school building in the village of St Johns, the Manx-medium class, now known as Bunscoill Ghaelgagh relocated to the vacated old school building with twenty-five children divided into two classes, At this point they were still the ultimate responsibility of the headteacher of St John's Primary School mainstream English-medium. However, by 2006 the Bunscoill Ghaelgagh became a 'stand alone' separate primary school with its own headteacher, Bnr Matthews. Since then it has gradually increased in numbers to its current 4 classes ranging across the primary age-groups.
Although new pupils now arrive at the Bunscoill from a greater variety of pre-school settings, the school, managed jointly by the Department of Education, Sport and Culture. and Mooinjer Veggey, still maintains important links with Mooinjer Veggey playgroups. Children moving ‘up’ from the the playgroups, will encounter familiar songs, rhymes and routines, and in some cases, familiar staff, so a degree of continuity is ensured.

You are viewing an item in the section: